About The Luena Foundation

The Joy of Giving - by Monique Jansse

Sometime ago my 12 year old boy came home from school and he told me a very special couple had come to his class that day, the parents of a school mate. They had taught him about the joy of giving. And how life becomes truly fulfilling if you can make a difference in somebody else’s life. He told me how this California based family started travelling the world and now reside in Aljezur. How they drastically transformed a life of incredibly successful Wall Street’ analysts to charity workers supporting over 25 projects focussed on children and communities worldwide. And how the death of an 11-year old girl in their house in Spain changed their perspective on life forever. I was intrigued. 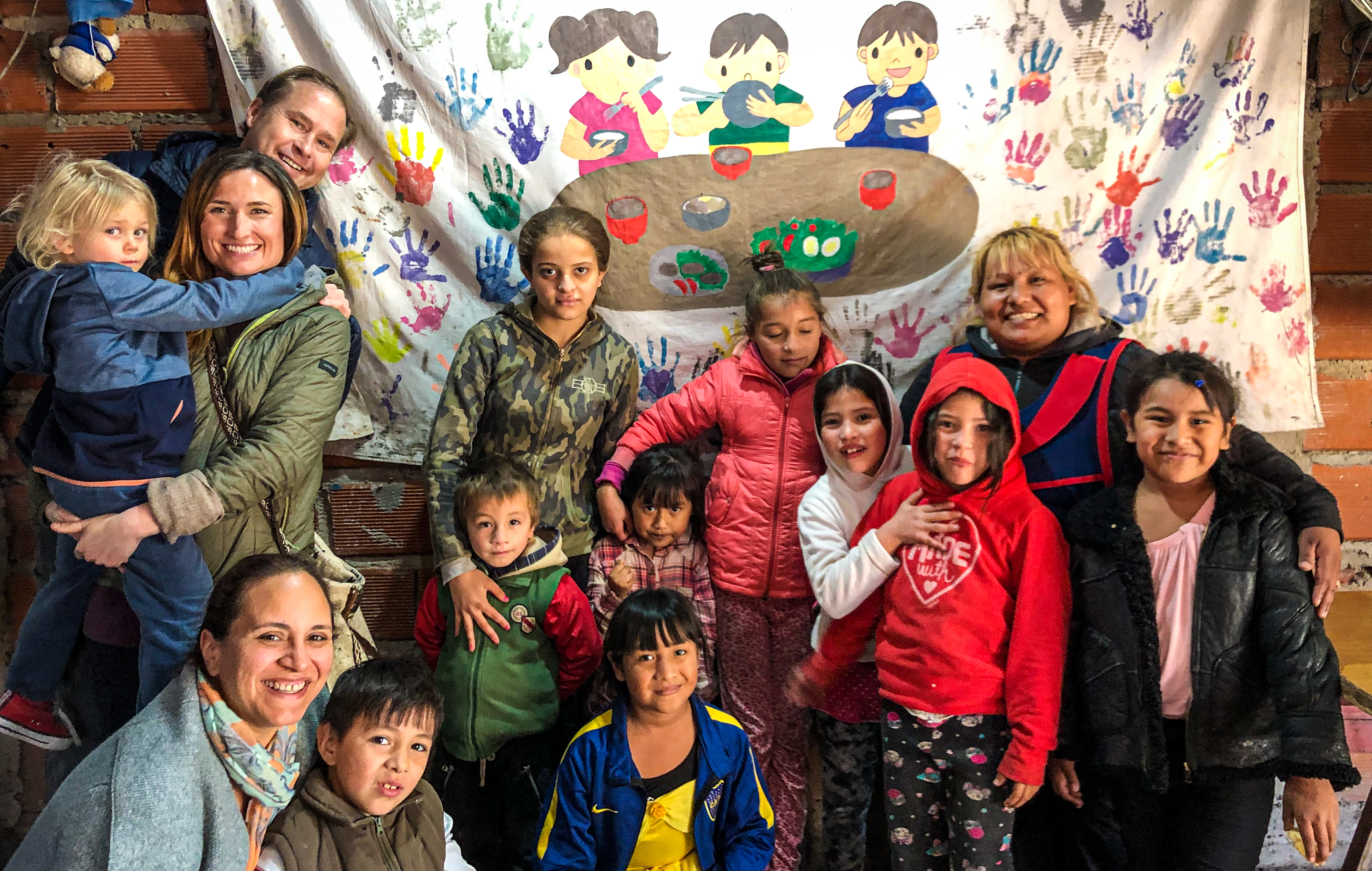 Just one week later I coincidently met Ryan and Emily, the special couple, at Arrifana. We clicked immediately and inspired by their stories, I asked them if we could also start supporting communities locally through their foundation. We are so fortunate to live here in Portugal, a country that is so welcoming to us, what can we do in return? Within a week they set up a whatsapp group ‘Um Grão de Amor’, and in no time people from Aljezur and surroundings were joining and connecting people in need with people wanting to give. Ranging from baby clothes to heaters, from homemade doll houses to simply love. And since the outbreak of the war, finding and helping Ukrainian refugees coming to Portugal.

So who are these beautiful compassionate souls? I wanted to find out more and went to meet them at their beautiful home in Espartal where they told me more about their life journey.

Ryan starts: ‘I graduated from Yale University with honours and started working as a Wall Street Medical Device Research Analyst and worked more than 100 hours a week for 13 years. I was very successful according to the world’s definition of success, but the more I earned and became successful, the deeper the hole inside me became and I filled this emptiness with excessive drinking. Making a lot of money really distorted my ego and I was sick in many many ways. At the age of 32 I put myself into a rehab program in California and at the bottom from a drinking perspective of this I met Emily who had a similar job. Completely unexpected Emily got pregnant after 6 months and decided to move to California against the advice of everybody around her. Who would sacrifice a career in New York for a crazy alcoholic in rehab in California?’

Emily takes over: ‘Then the financial crisis started, and this is where my nomadism kicked in. I always had a lot of wanderlust in me and wanted to get out of the United States. I said to Ryan: ‘Why don’t we just leave and start traveling?’. Under the influence of alcohol he agreed without remembering it the next day. This was not a Disney story. Leaving our lives and the money-making was not easy. We really needed to re-invent ourselves and let go of our ego.’ Emily bought tickets to Japan and convinced Ryan to come. Initially they would go for a year, backpacking South East Asia. Oliver was one year old by then.

Ryan continues: ‘We really loved to travel the unbeaten tracks, go into villages, learn new languages, meet the people and what we got from that was priceless. Traveling strips you down to the basic person you are. It formed our foundation. Emily forced us out of our comfort zone, and that is where happiness lies for us.’ Back in the US after one year they intentionally became pregnant of their second child. They tried to reintegrate but it didn’t work and they had to get away again. They simply could not go back to their old lives in California where they now noticed that everything revolved around money, jobs and being ‘successful’. Nobody even asked about their travels. Ryan: ‘We had nothing in common anymore. So we packed up our Chevvy and did all national parks in the United States and again it was very therapeutic. This was our new normal.’

They flew off to Iceland and started traveling Europe and Morocco for 3,5 years. During these travels we were always tourist-volunteering at orphanages and donating money to projects we came across. Emily got pregnant of their third child. And then they arrived in Spain and decided to settle in a tiny village of Andalusia called El Gastor with 1500 people. Ryan: ‘It is one of the most intact Spanish culture you will ever see. Super traditional, no foreigners. We bought a property, travelled a bit more and sent our kids to the local school on return.’ Emily adds: ‘It was hard for them without a word of Spanish. They cried and cried but kids can do this stuff’. They went through a 1,5-year renovation (‘Never Again!’ adds Ryan) and then travelled to Turkey, Greece, Chili, Bolivia and Argentina just before Covid for another 2,5 years.

But then disaster struck. Luena, the 11-year-old daughter of two of their closest friends at that time in Spain stayed over at their house for a sleepover with her brother. They all went to bed after a movie night with popcorn and then their oldest son noticed that Luena said she had a very bad headache. They went out of bed and saw she was convulsing and lost consciousness. But it was hard to get an ambulance to Ronda and from there to Malaga. It took 5 hours to get from Ronda to Malaga. It turned out she had a stroke aneurysm and there was no way they could have saved here. For 8 days they went to the hospital where she was in coma and then they came up with the idea to start this foundation in her honour. She tragically died and her parents donated 5 of her organs with which she saved 5 other children. The foundation had to be something with children, as she would have loved that. She was crazy about little children.

It was hard to start a foundation in Spain, so they registered in the US, set up a board with people they knew from their working life in the US and they moved to Bolivia to work in an orphanage for 3 months and they started to learn a lot from the Non Profit world. Ryan: ‘Our goal was to send a 100% of the money we receive from our donors to the projects. Also we invest a lot of our own money into the projects. An in-depth due diligence is key and we figured we could use our Wall Street expertise of analysing thousands of companies when selecting projects to donate money to. We spent 1,5 years traveling and working through Bolivia, Chili and Argentina. This was our college, our kids went to a local school in Argentina, and then we would go off to an orphanage one of the worst areas of Buenas Aires where we found poverty worse than Africa. We were only giving everything what was needed, but after a few months Emily could only cry at night. This was a turning point. We had to stop giving and start listening. We are not the white saviour. And to think that we know what they need is the wrong approach. We made mistakes. Poverty only has a little to do with food, housing, or money but in general it comes from lack of education and generations of living in a certain way. A localized approach is really important, these local community-based non-profits are overlooked by many, but during our fieldwork we discovered many.’

Emily continues: ‘When covid came it became impossible to meet the people in person, so we went back to desk research and talked to anybody who worked with a particular organization. To teachers, parents, to other partners and we always look for the right leader in the organization. You also have to make them invest in themselves. The community also has to invest at least 25%, and it works well that way. The community perceives it also as something that they have created. And we are almost in contact daily with all of our projects, so we are very much on top of them.’

Ryan adds: ‘From our side we donate personally but we also have our partners, although it is not always easy to find mindshare and money from people who are all very busy with their own lives. But this is our path. In the legacy of Luena we will always continue to help children worldwide. We cannot ‘un-see’ anymore. It’s a part of who we are. It’s our calling. And I feel much happier than I ever felt when I made loads of money at Wall Street.

‘It’s a complete personality shift’, Emily says. ‘So many people don’t know how to help or look away. There is always something you can do. Many you are not going to build a school in Malawi or pull Ukrainians over the border. Just pick something and start the process of opening. Use the energy you spend on social media. Meet your neighbour, see what they need. Talk to your kids about what can we do as a family today about what can we do. Talk about inequality. In a compassionate way. Those are the steps today. Give it for yourself. It’s fulfilling to give!’

Emily and Ryan moved to Aljezur in September 2021, because the homeschooling for them in Spain did not really work. They knew Alezur from traveling Europe and always felt this was something else. The incredible intensity of beauty of nature. Spain was beautiful but the schools were very rural and local, and they wanted to open the doors a bit more. During this last year they have set up this beautiful app group Um Grão de Amor for locals like you and I, where we can share if we know people in need or donate in all sorts of ways to people in need. This does not have to be in money, it can be anything, ranging from picking up Ukrainian refugees from the bus stop to donating baby clothes to a new born of a very poor single mother in Portimao.

But you can imagine that people like Ryan and Emily have nomadic blood and a strong urge to help. So as much as they love Aljezur, they will pack up their bags again and start traveling again to Africa, South America and India for the next 2 years to new and existing projects. There is so much to do out there in the field and for our kids to learn. People ask us if we are not afraid of losing our space at the school for our kids for example, but we are not. We have total confidence that our kids will find the right education anywhere. Out in the field, as difficult as it will be. They will sit on dirty floors again in local African schools and realise that just to have a table at school you are lucky. Maybe they will go to university or not, but at least we have shown them the other side. Going to Yale, study finance and make a lot of money is not the recipe for happiness. ‘Compassion is a journey’, Emily adds.  ‘You have to go back to this open heart again and again.’

If you want to support the beautiful work of Ryan and Emily you can visit the website of the Luena Foundation (www.luena.org) and make a donation which will go 100% into the projects they carefully select and support.